YOU try and keep a straight spine when you’ve been carrying the entire legacy of pop on your back for half a century!

Looks like she's inherited a dowager's hump along with her titles

Are we doing a listening party?

Let's not STOOPSHAME Her Serene Highness.

lolly said:
Are we doing a listening party?
Click to expand...

It won't be a first listen for me (unless we do midnight), but shall we do the Friday night? The day is free in the moopy calendar.

We absolutely should. 6pm or 7pm is normally good for such AFFAIRS. Probably earlier, as it's bonfire night in the UK.

I'd prefer 7pm so I can get dinner out of the way.

By coincidence I have the 5th off work which is handy because there's a few things being released that day (hard to believe, I KNOW). So I might make the Moopy thread my first listen.

The reveal there are two unfinished unused tracks from this era will inevitably cause years of discussion and anguish.

BoysForSeles said:
The reveal there are two unfinished unused tracks from this era will inevitably cause years of discussion and anguish.
Click to expand...

...and they still decided to go with Just A Notion rather than finishing those off

lolly said:
Looks like she's inherited a dowager's hump along with her titles

Oh darling, I read that as TITTIES and nearly fell off my POUFFE. Agnetha looking directly at the camera 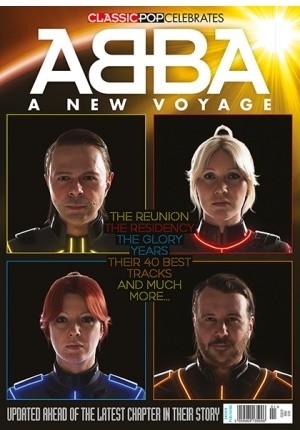 I'm not au fait with the details of how that concert CGI puppet thinguie will work but are we meant to think that 75-year-old Agnetha has at some point in the last 2 years being caught in motion capture spinning on the spot like in that video?

But yes, I agree. The movements of this will give some things away. Any women in their 70s don't move like they did in their 20s and 30s. Look at Madame X.

I’m pretty sure they’ve been upfront about it being a kind of digital blend between younger bodies and the movements and mannerisms of the present day members.

I'm not overly bothered. I'll be crying whenever any of them hug each other regardless.

Anyway I can’t for the life of me remember whether I bought the vinyl of this now but I’ve seen a few people saying theirs has been dispatched today.

Pingu said:
Anyway I can’t for the life of me remember whether I bought the vinyl of this now but I’ve seen a few people saying theirs has been dispatched today.
Click to expand...

I've not had anything. And I've been looking, as I've seen some people posting that their orders were cancelled, due to the number of transactions (bundles recorded as individual items), and banks recording this as suspicious activity

Actually I'm fairly sure I paid by paypal, and they charge immediately, rather than when dispatched.

After my Just A Notion CD single not being dispatched until the Tuesday after release, I'm not entirely optimistic of getting it this weekend, though.

If the HMV and Rough Trade exclusive offerings aren't available on Friday that still leaves the standard CD and vinyl hopefully at the very least for release day.

Has anyone seen the TV ad yet?

I definitely ordered something from Amazon and then cancelled it because I wanted to do the website pre-order so I could get pre-sale tickets.

But I don’t think I ever got a receipt from that annoyingly.

It seems to be HMV doing the early dispatches though so I guess I backed the wrong horse either way.

I got the HMV exclusive vinyl and that's been dispatched.

Tisch said:
I got the HMV exclusive vinyl and that's been dispatched.
Click to expand...

I think he ordered that for in store collection.

Track descriptions from somebody on Popjustice:


When You Danced With Me: Chiquitita meets Arrival. Mid tempo. Frida & Agnetha both sing lead. The instrumental is lovely.

Little Things: Christmas ballad about how one wakes up in he Christmas morning and be grateful. Very good track, sounds like a happy version of Like An Angel Passing Through My Room. Frida & Agnetha on lead although Agnetha is more prominent. The song ends with children choir.

I Can Be That Woman: Agnetha leads. Love ballad. I need more listen to decide if this one's good or not.

Keep An Eye On Dan: Agnetha leads. Upbeat synth-pop. This song is very un-ABBA but it's really good. You guys are not ready for the chorus & amazing synth in this song. The vocals in this song left me thinking Agnetha in her prime would have NAILED this. The ending piano sounds identical to SOS. The boys sang backing vocal here.

Ode to Freedom: Grand epic full orchestral ballad. Very emotional. If Voyage was the last ABBA album I'm happy this was the song to end it.

This has been postponed until tomorrow, following the deaths of two people at an Abba tribute act gig in Sweden last night. Apparently a man in his 80s fell from the 7th floor of the venue, killing another person and injuring one more.

lolly said:
This has been postponed until tomorrow, following the deaths of two people at an Abba tribute act gig in Sweden last night. Apparently a man in his 80s fell from the 7th floor of the venue, killing another person and injuring one more.
Click to expand...

no doubt inspired by 71 year old Agnetha's ENERGETIC SPINNING. how reckless of them to make the olds think they can STILL THROW SHAPES.

So throw the beauty on the fire

Everyone protect @Pingu at all costs

At least the old man probably enjoyed his last moments.

Poor bugger who got landed on though

Consider my tits torn off

I seemed to get Just A Notion at midnight, so I’m going to stay up for the release tonight