Still no DVD news, but apparently we're getting a (digital-only) audio release in December.

She can SHOVE that.

I do not need Bertie's song

Why on earth only digital? She's the sort of act who could get away with charging a fortune for all sorts of special editions and fans would gladly sell organs.

Not precisely the news I wanted to hear, but I'll take it over nothing. There may be more to come of course or there may be nothing at all - this source is not exactly watertight.

Could this be some kind of Bootleg? Concord isn't the name of her record label...

She records under own label (Fish People) and licenses it back to EMI. So technically, she could choose to with Concord if she wasn't happy with EMI anymore.

This news doesn't hurt me, but I wanna know where the DVD footage lies.

straightorbroken said:
This news doesn't hurt me, but I wanna know where the DVD footage lies.
Click to expand...


With your video editing skills you could whip up a spectacular effort.


What the ACTUAL FUCK?

Were the live vocals at this show ACTUALLY GENUINELY PROPERLY GOOD or was everyone just convincing themselves that they were amazing? I've always wondered...

I wonder if maybe she didn't like the stuff they filmed. Something that works wonderfully on stage isn't necessarily going to be as great as a video, and Kate's notorious for being hands on and something of a perfectionist.

Susan-Claire said:
Were the live vocals at this show ACTUALLY GENUINELY PROPERLY GOOD or was everyone just convincing themselves that they were amazing? I've always wondered...
Click to expand...

Oh hun the vocals were genuinely and truly ON POINT AND PROPERLY GOOD. Trust!


What the ACTUAL FUCK?


She is A Modern.

And those vocals shot through me like bolts of lightning - Hounds of Love hit you in the face like a horse's hind legs and the science fiction orgasm of A Deal With God were just out of this world. Maybe it actually is for the better it's not ready yet as the memory I have of Kate and her merry men is just so special. 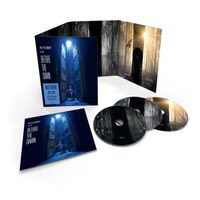 Now that looks more like it. A disc per act? Yes please.

The vocals were fine, but her voice is certainly deeper compared to her heyday in the 80s, so most of the songs from that period 'sound' different.

I really wish they'd release a proper DVD with all her videos and rare performances rather than this.
Last edited: Sep 24, 2016

Officially being released as 3CD and 4LP sets. No sign of a DVD (yet)

That could all fit on one DVD.

According to the new Mojo interview she's said NADA to a DVD.

Can't she just get AIRBRUSHED or something?

They've been playing clips. I always forget what her speaking voice is like <3
Last edited: Nov 18, 2016

She confirmed in her 6 Music interview that there'll be no DVD, and she's not currently working on new material.

In happier news, here's the gorgeous And Dream of Sheep video from the live shows.

This is one of my favourite songs of hers, so haunting. This is VERY NICE DEAR and I'm really SORRY you got HYPOTHERMIA recording it but if you're not going to release a DVD it's a SHOULDER SHRUG from me - it's decontextualised and missing all the atmosphere of the original recording.

You should listen to the 6Music interview because she explains her reasoning and does so rather eloquently.

IS THERE ANYBODY OUT THERE?

Which is a pity as I felt the show itself benefited from how warmth and human she actually seemed, in contradiction to the rumour mill...

Surely there's an argument that she ALWAYS HAS BEEN.

No she used to be a PRETENTIOUS YOUNG CUNT

writing songs about literary heroines and indulging in interpretive dance, while all her classmates were unzipping their loon pants and getting fingered around the back of the local Wimpy.

Much as I'd like the opportunity to see the show again, her explanation in the 6 Music interview was perfectly reasonable and not pretentious at all. She doesn't owe us a DVD, or anything else.
Last edited: Nov 22, 2016

I don't see a BIT of pretence as a bad thing anyway.

If anything I'm always struck by how humble and self-effacing she is about her work when she's interviewed. I can totally see why what she does would come across as a bit arty-farty to some, but that's not the same as being pretentious.

To reach for an easy comparison, Tori Amos (who I also like a lot) is somebody I would absolutely describe as pretentious about the work she creates.
Last edited: Nov 22, 2016

IS THERE ANYBODY OUT THERE?

She doesn't "owe" anyone ANYTHING but it would be nice for the QUITE CONSIDERABLE AMOUNT of fans who couldn't get tickets or lived in other countries when she didn't move the production away from one venue...

Sheena said:
She doesn't "owe" anyone ANYTHING but it would be nice for the QUITE CONSIDERABLE AMOUNT of fans who couldn't get tickets or lived in other countries when she didn't move the production away from one venue...
Click to expand...


I don't disagree, but it's a bit of a leap from that to PRETENTIOUS OLD CUNT. Her reasons for not releasing the DVD made sense to me.

Besides, it's been recorded so no doubt we'll get it when she dies.

Some interesting nuggets from this SuperDeluxeEdition interview with one of the guitarists from the tour. Sat In Your Lap and The Big Sky were both considered for the setlist, but ultimately ditched.


SDE: When you first got that call in October, did she already have quite a clear vision of what she wanted to do?

DR: I think she was pretty damn clear, yeah. She knew the material late in the year, but very precisely. There was only one thing I’d started listening to – and I can’t even remember what it was – but something got ditched.

SDE: Really? Because The Ninth Wave and the second half of Aerial, A Sky of Honey, they’re obviously as is. You’re not going to leave anything off that.

DR: No, the first section … I can tell you if I look [David clicks around on his computer]

SDE: This is probably a stupid question, but you didn’t have any hesitation in accepting the offer to play…

DR: No, none at all… [David find’s the info on his computer] She was wanting to do Sat in Your Lap and then changed that for Top of the City. We never rehearsed Sat in your Lap. I learned it, but it never got as far as rehearsals.

SDE: If that had been done, that would’ve been the earliest track to be performed, because that was off of 1982’s The Dreaming.

DR: Yeah. Well, Never be Mine we rehearsed quite a lot, but only did it a couple of times.

SDE: Why didn’t Never be Mine make it into the show, then?

DR: I think Never Be Mine was just a bit too downbeat. And then the other thing we looked at briefly, what was it? The Big Sky, which we’d tried. We only tried it once with the whole band – once or twice – and it just sounded like a bit of a mess because she was thinking of that as the encore, maybe. I think both Bertie and I thought Cloudbusting would be better, so we pushed for that.
Click to expand...

I'd have killed to hear either of those, but can totally understand why they wouldn't have worked.

I'm glad Never Be Mine is on the album at least. It's one of my all time favourites of hers.

than I remember
You must log in or register to reply here.